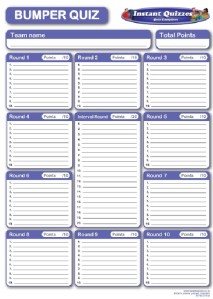 If you’re running a ‘serious’ pub quiz night or a regular quiz evening that will last around a couple of hours, you need one of our Bumper Quiz packs.

We have hundreds of pub bumper quizzes – they include 10 rounds of 10 questions and a 20 picture quiz round.

In addition, you get instructions, scoresheet, team answer sheet and a poster to advertise the quiz.

Download the FREE Bumper Quiz Pack for your pub quiz above – right click and save to your hard drive.

This quiz includes a free picture quiz round – Everything Starts with T – and also the following questions;

For more ‘Everything Starts with…’ picture rounds  * click here *

Round 4 – Towns and Cities

Round 7 – Science and Nature

Round 8 – Quickfire Round –  Inventors

Name the people credited with the invention of the following things – surnames are acceptable.

Final Round – Wipeout Round

10 questions – answer as many as you like – you’ll receive 1 point for each correct answer but remember – if you get any wrong in this round, you’re wiped out and get 0 points. Teams who get full marks on this round receive 5 bonus points giving them 15/10

In which year did Bertie Wooster’s valet first appear in a book?